Blade HQ let us tag along with them again this year at the 2012 Blade Show. We all had fun and enjoyed meeting all of the great people of the knife industry.

You can read through this whole post or jump to the knife brands you love most:
Kershaw/Zero Tolerance
We talked with Jim MacNair of Kershaw (famed designer of the ZT 0777 and the new ZT 0888) and Jennifer Newsome (even more famous from the Nutnfancy Youtube videos). They showed us a bunch of the new stuff that Kershaw and Zero Tolerance are putting out this year.


Zero Tolerance had some particularly stunning models at the Blade Show this year.


First was the ZT 0888 which is the newly minted Overall Knife of the Year. The knife will come in a couple of variations; one features a composite steel blade and flipper with a S110V edge and a 14C28N spine. ZT also had a carbon fiber version of the 0560.


I love the look of the carbon fiber; this one is sure to be popular. RJ Martin and ZT got together for the ZT 0600 which won this year’s Collaboration of the Year Award.


The knife is based on RJ Martin’s award-winning Q36. The knife features B75P stainless steel (similar to BG42), titanium, and carbon fiber.

Boker
Boker is having a ton of success with the custom collaborations they have been putting out recently. At the show we saw the Boker Kwaiken.

This is designed by Lucas Burnley. Lucas also told us that there are a few more Boker models that are coming down the pipeline. 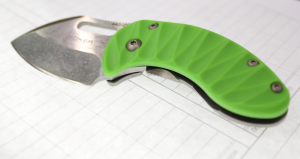 The Boker version of the Dave Curtiss Nano was also on display, and I am a huge fan of this knife. Plus the price won’t be too bad.

TOPS
TOPS had some new knives on display at their booth. Several of these were new neck knives that looked like they will be really cool. 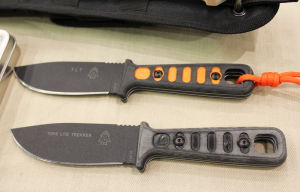 Spartan Blades
Spartan Blades debuted a new folding knife that they are calling the AKRIBIS. This knife will go into production around August. 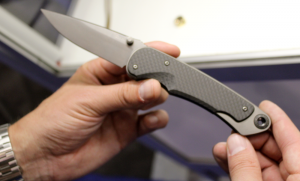 Chris Reeve Knives
The Sebenza turned 25 this year. To celebrate this milestone, Chris has released a new special version of the Sebenza.

This new Sebenza has tons of improvements including a new grind on the blade; a bronze washer on the lock side that adds stability; a ceramic ball that acts as the interface between the lock bar and the blade; a thicker blade and much more!

CRKT has a brand new Ken Onion knife called the Foresight. It won the Imported Knife of the Year Award. This knife will be available sometime around July.

Spyderco
As always Spyderco brought tons of prototypes and concepts to the show! Unfortunately we were not allowed to take pictures.

We were able to get a picture of their new model that won Most Innovative American Design: the Spyderco Autonomy. This knife is an automatic that was designed with the Coast Guard in mind. At the prototype booth they showed off a version with H1 steel and a yellow handle. The button is over-sized making it easier to open with gloves on. SOG is working this year with Jason Brous to make several new knives. One that they had at the Blade Show was SOG’s version of the Triple Threat. This collaboration should yield several awesome knives.

Microtech
Microtech had several custom versions of their knives available. The new versions of the knives with the titanium handles look really cool. They debuted their new bottle opener built from a Socom Elite handle.

Blackwater
Blackwater is back! They have a couple of new knives made by Lion Steel. These knives are similar to the DPx Gear knives that you may already be familiar with.