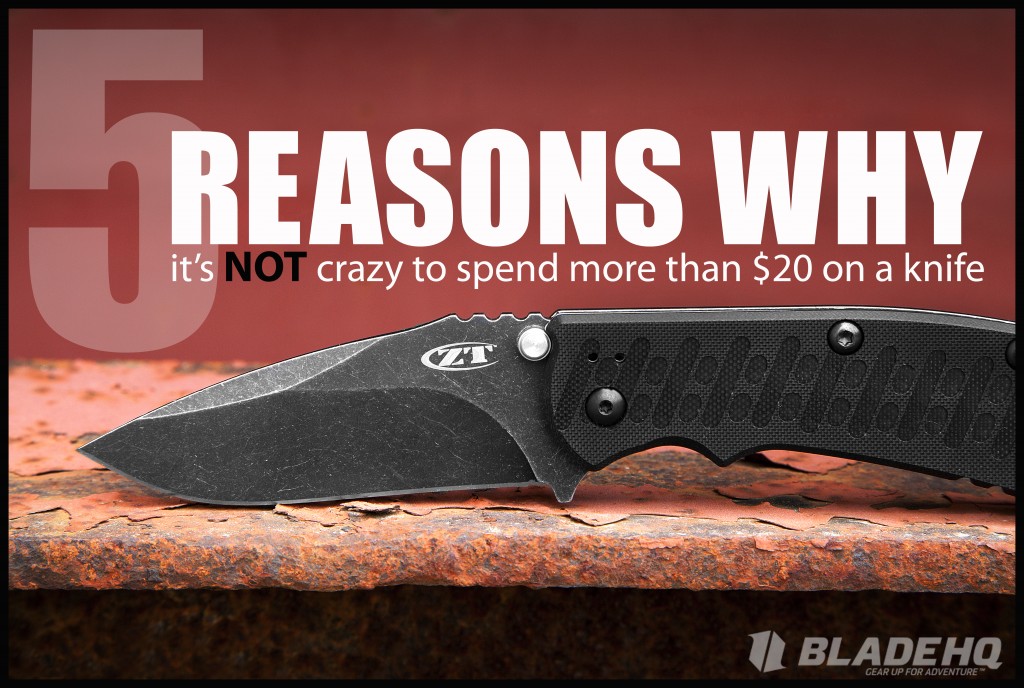 We’ve all heard it before—“You spent how much on that knife?”
Most non-knife people don’t understand spending much money at all on a knife, whether it’s $20, $40, or more (and it often is more). I can’t say I blame them though; I used to be one of those people before I started working here. The longer I’ve been around knives though, the more I’ve come to realize that there are in fact benefits to spending more than the minimum amount possible on a knife.
Before I get to those, though, I’m not saying you should never buy a budget knife. There are times when you are watching your spending, or maybe you just want an inexpensive beater knife, so a $20-knife might be the best option. There are even lots of options under $40 that will give you a great bang for your buck. The Ontario RAT Model 1, for example, is proof that you don’t have to spend tons to get something great.
This post, however, is meant to show that there is value in spending a little more on a knife, for anyone out there who thinks the knife community is plain nuts. I asked some people here at Blade HQ why they’d spend more than $20 on a knife, and here’s what they had to say. They had some great answers, but if you can think of any other reasons why you’re inclined to spend more than $20 (or any amount) on a knife, post them in the comments!

“Just like with most other products, you get what you pay for. Because I am stingy with my money, I would not spend less than $20.00 on a knife because I will want it to last more than two weeks under regular use.”
“Quality is one thing I’m definitely willing to pay a bit more for.  A lot of these knives that are a bit more pricey have the quality that . . . lower-end knives just don’t have.”
“It’s always better to have any knife on you than to not have one at all, but if I find myself in a survival situation, I’d much rather have a knife that I paid a bit more for, and not the $10 knife that can’t take much abuse. Paying more will typically get you the quality and dependability that you’d want in a survival situation.”

“If there are any issues, I would want a warranty on the knife. Anything under $20.00 typically does not have a warranty, and if it breaks because of defects, I would want it fixed by the company. I [typically spend] between $50.00 and $100.00 when I buy a knife for the warranty, the superior steels, and quality I can trust from brand-name manufacturers.”

“It’s always cool to grab a knife that you know there isn’t a bunch of—something you got that not everyone has.”

“Actually I had an experience like that last night! So one of my buddies came over and I showed him my new Protech Steampunk Godson and told him how much it’s priced for on the website. He had no idea why I’d spend that much on a knife. [Aside from quality,] in this particular instance it was also the unique design of the knife. I love the scale on the steampunk, as it’s totally my style and I just had to have it.”
“Some people like the specific design of a blade or like a specific designer. Those knives in particular seem to be a bit more pricey, but they’re definitely worth it.”

“Don’t we all have those hobbies and interests we’re willing to spend money on? I have friends who will spend hundreds of dollars on music equipment that they just use for fun, not professionally or anything. I’d never pay that much for music equipment, but I’d totally spend money on stuff like pocket knives and camping gear. As long as you’re being smart with your money, I think it’s perfectly fine to spend money on the things you’re interested in, even if it doesn’t make sense to other people. We’re not all going to be interested in the same things, but that’s not a bad thing.”

Now it’s your turn; what would you say to someone who asked why you’re willing to spend more than 20 bucks on a knife? What benefits are there?
(Let’s keep this enlightening rather than condescending. I’m betting most of us weren’t always knife people.)