Anatomy/Parts of a Butterfly Knife by Anna Gardner

Sandwiched: Assembled in layers that are generally pinned or screwed together. Pivot pins can be adjusted tighter without binding. When knife is closed, the blade rests in between the layers of the handles.

Channeled: Each handle is formed from one piece of material. The groove (where the blade rests when knife is closed) is created by folding, milling, or being integrally cast. Channeled construction is known to be stronger than the sandwiched construction.

Bite Handle: The handle that closes on the sharp edge of the blade.

Choil: Small curve found on some knives just above the kicker, that makes it easier to sharpen the blade.

Kicker (or Kick): Area on the blade that prevents the sharp edge from contacting the inside of the handle and suffering damage. This is sometimes supplanted by an additional tang pin above the pivots.

Latch: The standard locking system, which holds the knife closed. Magnets are occasionally used instead.

Latch, Batangas: A latch attached to the bite handle.

Latch Gate: A block inside the channel of the handles stopping the latch from impacting the blade.

Latch, Manila: A latch attached to the safe handle.

Latch, Spring: A latch that utilizes a spring to propel the latch open when the handles are squeezed.

Safe Handle: The handle that closes on the non-sharpened edge of the blade.

Spine: The thickest par of the blade, the blade spine would usually be at the back (top) of the blade.

Swedge: Un-sharpened spine of the blade that is angled to appear as if it were sharpened.

Tang/Ricasso: The flat section of the base of the blade where the handles are attached with pivot pins. 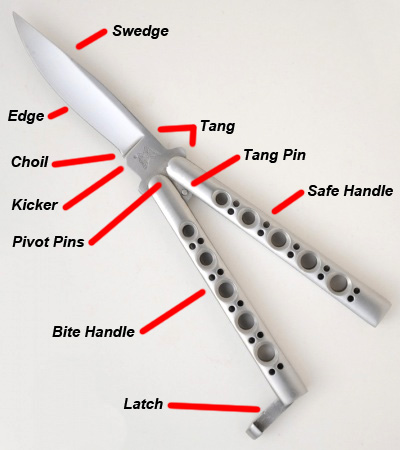