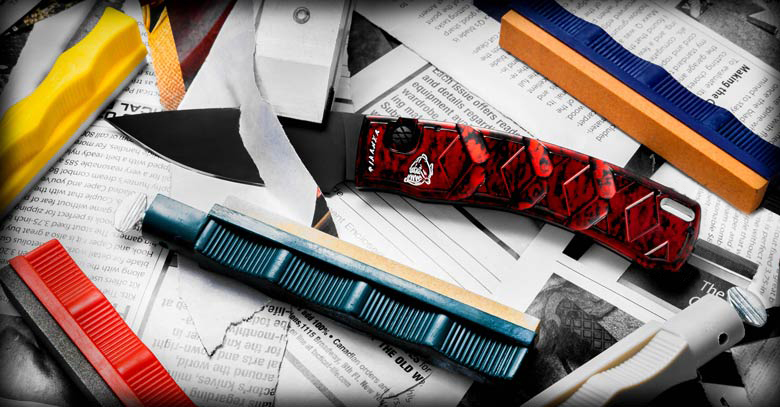 If you have a knife, then you’ll need to sharpen it at some point, if you haven’t already. Like everything else you own, knives require maintenance. If you’re new to knives, it might be difficult to tell when it’s time to get sharpening. Here are a few methods and pointers to help you know when it’s time to give your knife some blade sharpening love.

Before I go into the different methods you can use to test the sharpness of your blade, there are a couple of things you can check out on your own to see if it’s time to bust out the knife sharpener. For example, if you can see any micro serrations or dull or folded over spots on the blade just by looking at it, then it’s time to do some blade sharpening. Also, if you notice any spots on the knife that seem to be dulling faster than others, you guessed it—time to even things out by sharpening that blade. Finally, there’s also the obvious: if your knife is noticeably less sharp than it used to be and isn’t cutting well, you best get sharpening.

It’s important to stay on top of knife sharpening to retain the blade’s primary edge. If you don’t and the edge gets too dull, it will require much more work and time  to bring it back to a good edge.

The paper cut test is really simple. Here’s what you have to do:

Grab a piece of paper and hold it up vertically in front of you. Rest the blade on the top edge of the piece of paper and slice downward and away from yourself. Try to use the entire knife edge as you do this test. If the knife is sharp, the cut should be clean and effortless. Contrastingly, a dull blade will leave you with a torn paper, or it may even skip as it cuts or fail to cut into the page entirely. Using the whole edge of the blade will also help you to see if there are specific problem areas on the blade that don’t cut very well.

Out of the three sharpness tests that are listed in this post, the arm hair test is probably the one that has the most references made to it in the knife community. If you hang out with lots of other knife guys or peruse blade forums, then you’ve probably heard guys talk about having bald arms whenever they get a new knife. And in case you were wondering, yes—it is considered manly to have clean-shaven arms if you used a knife to shave them.

This test is easy and probably self-explanatory, but it is a little risky since cutting too closely to your arm could result in a pretty cut. So, let’s leave this test in the category of “don’t try this at home,” but just so you know, here’s what the results would indicate: a knife that is run above the arm leaving all or most hairs unscathed means a knife is dull, while a knife that leaves few or no hairs means a knife is sharp.

For this method, push the edge of the blade along the top of your fingernail plate—this is the part that continues from the nail cuticle to the tip of your nail. So it’s basically the whole nail, not just the tip. For me, I’ve found using my thumbnail to be the easiest for this test. Lightly place the blade vertically on top of your nail plate. Then push the knife away from you, toward the tip of your nail. Just like in the paper cut test, the more of the blade’s edge you can test as you pull the blade along your nail, the more accurate of an idea you’ll have about how sharp your knife really is.

If the blade digs into the nail and creates nail “shavings” as you move the blade across your nail, that’s good news! That means your blade is sharp. If nothing much happens and the blade glides effortlessly across the nail and doesn’t catch, it’s time to get sharpening. To sum it up, resistance is a good thing and signifies a sharp blade and no resistance signifies a dull blade.

Generally speaking, a good (but not very strict) rule of thumb is to sharpen your knife at least every other month because most knives will hold their edge for that long under regular use. This is a good rule to follow if you’re new to knives and don’t have much experience determining when you need to sharpen your knives. If you’re you’re using your knife or knives extremely often, you’ll want to sharpen them more often than that when you feel they’re not  up to par. That’s where knowing how to test sharpness can come in handy. The longer you’ve been around knives, the easier it will be to tell when you need to get sharpening, too.

If you’re in the market for a knife sharpener, read this post on different knife sharpening systems. You can also browse through the knife sharpeners section on Blade HQ to see everything that’s available there. If your knife needs some sharpening love, be sure to check out our Knife Sharpening Guide.

What other tricks have you found that help you know when it’s time to sharpen your knife?