UPDATE:
Spyderco has announced the potential release dates for some of these knives. I have updated the corresponding items.
For those who don’t know, Spyderco Knives held a meet for all of their fans on March 6, 2011 in Amsterdam. Then, Spyderco was at IWA in Germany (also in March), and in Oregon at the OKCA show on April 8-10. Needless to say, there are a lot of new prototype models and new knife concepts that Spyderco is working on. I thought I would share my thoughts about them with you today.
In general, Spyderco is updating the spring that they use in their FRN Slipits. I think that this is a good change and will improve the overall integrity of these knives.
Remember that most knives Spyderco makes take about a year or two in the concept stage, before they become a production prototype. Then the prototypes can take around a year to go to production. That being said, this is only a general guideline and not a hard and fast rule. There is no way to know for sure when a specific model will be released until Spyderco says so.
Here is a list of what is upcoming from Spyderco in alphabetical order:
Ayoob Sprint Run
This is a re-release of a popular knife designed by Massad Ayoob. Previously it had Almite scales, but this run will have G10 handles.
Balance Stainless Steel
This will be a new stainless steel version of the Spyderco Balance designed by Ed Schempp. It was released with carbon fiber scales last year. This new version will be a frame lock, the carbon fiber version had a liner lock.
To remind you what the blade shape looks like here is a picture of the carbon fiber version. 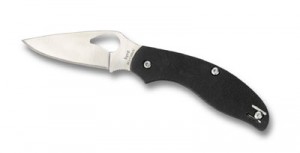 Byrd Tern – UPDATED
This is a new Byrd slipit knife. Its handle looks like the traditional UK penknife models that Spyderco makes, but the blade is a little slimmer. The blade will have 8Cr13MoV steel.
MSRP: $34.95
Scheduled Release: August 2011

Carpenter
This knife is made of Carpenter steel, in fact it is made exclusively from Carpenter parts. It seems like it will be a nice EDC folder. 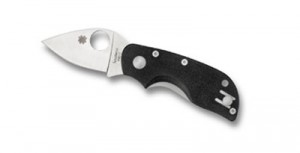 Cat – UPDATED
A lot of people will be excited about this one. Spyderco is releasing a G10 version of this model.
MSRP: $69.95
Scheduled Release: July 2011 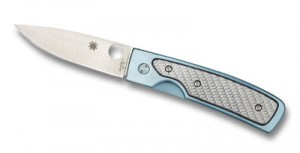 Centofante Memory – UPDATED
This is a Frank Centofante design. He collaborated closely with Spyderco and this knife is dedicated to his “memory.” It has VG10 steel and a flat grind blade, it also has a liner lock mechanism. The handles are blue anodized titanium and there is an attached carbon fiber insert. It’s a pretty knife.
MSRP: $349.95
Scheduled Release: November 2011 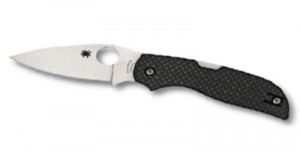 Chapparal – UPDATED
This is a nice little backlock folder. It will have a S30V blade and a carbon fiber scale to start. There are already plans to do several handle materials; each year a new material will be released. Features a reversible wire clip.
MSRP: $174.95
Scheduled Release: July 2011 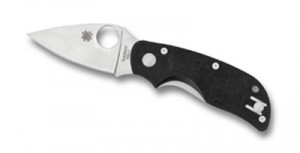 Chicago – UPDATED
Spyderco is releasing a G10 version of this model. It was originally designed to fit within Chicago’s knife laws (and other metropolitan cities in the US).
MSRP: $64.95
Scheduled Release: July 2011

Delica Sprint Run
Spyderco is releasing a new version of their damascus Delica line. Last year they did a blue version and this year they are doing red/brown. This new one will have gold titanium bolsters on top, and red/brown jigged bone. The damascus on the blade will be very similar.
Here is a picture of last year’s Delica. 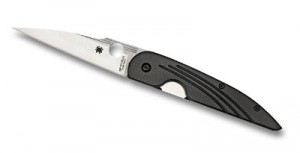 Des Horn Folder – UPDATED
This model was designed by Des Horn, a South African knifemaker. It features a wharncliffe blade and G10 handle scales. It will have S30V steel, and it will have a tip-down wire pocket clip (this is actually a 1st for Spyderco).
MSRP: $189.95
Scheduled Release: July 2011 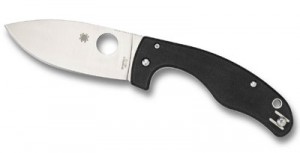 Dialex Junior – UPDATED
This knife is a cool folder with a large cutout in the handle to provide a sure grip. This knife has VG10 steel and a tip-up wire pocket clip. It also has a wide leaf shape blade and a liner lock.
MSRP: $219.95
Scheduled Release: August 2011

Dyad Sprint Run
This knife will feature blue FRN handles.
For reference: this is what the Dyad looks like. Gayle Bradley 2
This new version will be slimmer and a whole lot lighter. Otherwise it looks very similar. It hasn’t been officially named yet.
Gayle Bradley Air
This will be an ultra light knife at 1.3 oz. It will have a liner lock mechanism. More detail to come! 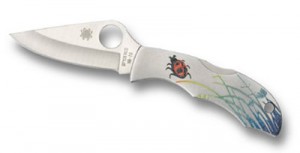 Ladybug Tattoo – UPDATED
Spyderco first made the Dragonfly tattoo, and now they are making the ladybug tattoo. It will be a stainless steel Ladybug 3 will the tattoo pattern.
MSRP: $79.95
Scheduled Release: July 2011

Lil’ Temperance 2
This knife will have a slightly slimmer leaf blade, and will use a frame lock instead of a compression lock.
For Reference: the original Lil’ Temperance Lum Tanto Sprint Run
This is a run of the popular tanto folder. This one will have foliage green G10 handles. 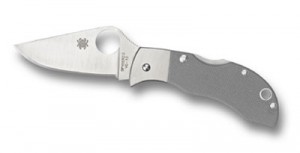 Manbug – UPDATED
This knife looks like a large ladybug, it is slightly wider than the original ladybug. It will have a full flat grind, and it will have a stainless steel bolster and a peel-ply gray G10 scale.
MSRP: $119.95
Scheduled Release: September 2011

Military Fluted Titanium
The military is going to be released with fluted titanium handles, and it my opinion it is beautiful. These will go very quickly.

Native V – UPDATED
This knife is going to be available in G10 and in fluted titanium. It’s a little bigger, and will have a full flat grind. It will use Carpenter’s new CPM-S35NV steel.
MSRP: $199.95
Scheduled Release: August 2011

Persian XL
Yep, just like it sounds. This will be a larger version of the Persian.
Here’s a picture of the Persian to remind you what it looks like.

Puukko
This is a traditional Scandinavian knife, and will be part of the Spyderco ethnic series. It will use CPM-S30V steel. It will have a Desert Ironwood handle.
Pygmy Warrior
This will be a smaller version of the Spyderco Warrior. This so far is just a concept model, so there is not a lot of information out yet about it.
Here’s a pic of the Warrior.

Sage IV
This one is only a rumor so far, but it looks like it will probably be a mid lock, or back lock mechanism, with micarta scales. Once again, this is only a rumor.
Southard
This one is also only a concept model, but is a cool framelock.
South Fork
This knife was designed by Phil Wilson. He traditionally designs knives for sea applications, and this is a nice fixed blade. The Spyderco production version will use S90V steel.
Here is a picture of what his design shape looks like, but the Spyderco production version will have differences. 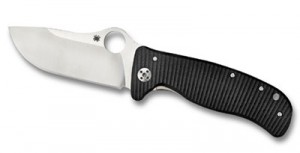 Spyleone (Lionspy) – UPDATED
This is a collaboration between Spyderco and Lion Steel. The handle looks similar to a Lion Steel SR-1. It will be a cool, beefy framelock folder with Elmax steel and a G10 handle on one side, titanium on the other.
MSRP: $499.95
Scheduled Release: August 2011 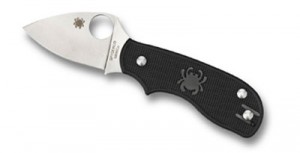 Squeak – UPDATED
This little folder has a FRN handle that looks like G10. It has a reversible wire pocket clip, and will have N690 steel.
MSRP: $69.95
Scheduled Release: June 2011


Stretch
Spyderco is working on a new version of the stretch, with a straight spine.
Szabo Folder
This knife looks like they took the Szabofly butterfly knife and turned it into a folder. It fits within the Marshall Blade Craft line of knives, so it can be used tip-down or tip-up. It will be a compression lock folder and will be large.
Techno
This is a small framelock folder with a tip-down pocket clip.
Tuff
This is a massive folder. The first thing that you notice about this blade is that it has a unique groove. Its a framelock folder, with a grippy G10 handle. 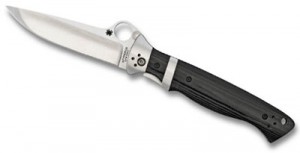 Vallotton Folder – UPDATED
This is another big folder designed by Butch Vallotton. It has a pin on the blade that acts as a stop when the blade is opened , a new version of a liner lock. It also features polished G10 scales with full liners. There is also a unique bolster with G10 in the middle of the stainless steel piece, which gives it an interesting striped look.
MSRP: $299.95
Scheduled Release: June 2011

Yojimbo 2
The name means bodyguard in Japanese. It’s a hefty and stout interpretation of the whanrcliffe folder, with a straight cutting edge. Michael Janich designed the knife. It has a partial hollow grind blade, and a compression lock. It will have S30V steel and a G10 handle.