Before we dive into the popular knives, lets talk about a few common terms in the traditional world. First, jack knife. A jack knife is the general term for a simple folding knife. Jack knives encompass many models of traditional knives and can be single-end opening or double-end opening. Jack knives come in many different varieties, with or without springs and bolsters.

Other common phrases that we mentioned in the beginning are slip joints and lockback knives. Slip joints are simply non locking folders, and lockbacks have a locking mechanism that releases on the back. Other traditional knives have other locking mechanisms like Virobloc, which is found on Opinel knives, and some even have liner locks that are popular in modern knives.

A Barlow knife is a traditional slip joint that has a lengthened bolster and oval handle. Barlow pocket knives usually can be found with two blades that pivot on the same end of the handle. 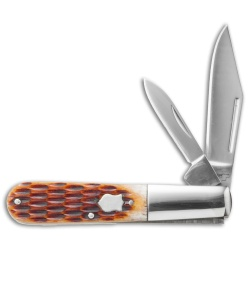 Boker Plus Barlow - The Boker Plus Barlow sports 440C blades, a jigged bone handle, and a stainless steel liner. This knife rocks a clip point blade along with a smaller pen blade for precise cutting.

A Butterbean pocket knife is a slip joint folder that features a spear and a pen blade that open on opposite ends of the handle. The Butterbean style is popular among Case Knives. 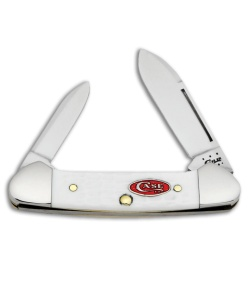 Case Baby Butterbean Canoe - This model is a Butterbean as it features two blades on opposite ends, but it is also known as a Canoe because the handle has a slight Canoe shape. The blades are Tru-Sharp material and the handle is jigged Delrin.

Canoe knives are traditional slip joints that have a handle and two blades, usually a spear and a pen. Sound familiar? If so, thats because Canoe and Butterbean are virtually identical; Case just created a smaller line from Canoe and named it Butterbean. 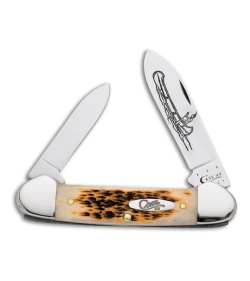 Traditional Congress knives are recognized by their convex upward-curved handle. These pocket knives are slip joints that have two or more blades, usually being four. Typical Congress slip joints have a sheepsfoot, spear, coping, and pen blade. 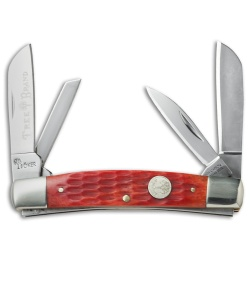 Copperhead traditional knives are slip joints with curved designs made to cover every sharp corner to prevent pocket wear. Most models feature two blades, although there are many single blade models as well. Copperhead knives were a very popular carry option for soldiers in the Vietnam War. 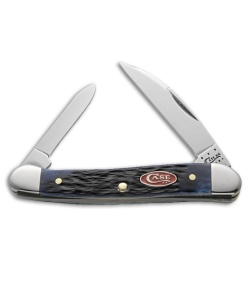 Case Mini Copperhead - This Copperhead boasts two Tru-Sharp blades and a navy blue bone handle. The blade styles are wharncliffe and pen. This is a great lightweight knife for pocket carry.

Equestrian knives are technically the models from Case, although other manufacturers like Buck make knives with hoof picks. These slip joint folders have a clip point blade and hoof pick for for anybody that is around horses. 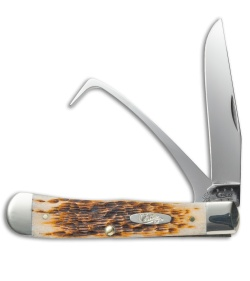 Case Equestrian Amber Bone - This Equestrian slip joint features a Tru-Sharp blade that pivots on the same end as the hoof pick. The handle is amber bone and it is made in the USA.

Hobo knives put a spin on traditional slip joints by adding a spoon and fork. Some models even feature a folding bottle opener. 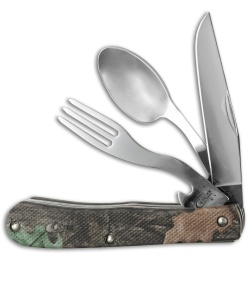 Case Hobo - This traditional folder has a Tru-Sharp blade, zytel handle, and detachable spoon and fork. Each Case Hobo knife is made in the USA with quality materials. 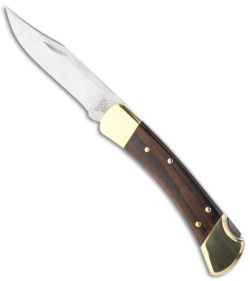 Buck 110 - The Buck 110 model has a rich history in the knife world. The Buck 110 was the first folder that could stand up to the tasks of a normal fixed blade. The 110 is a lockback design with a 420HC blade. 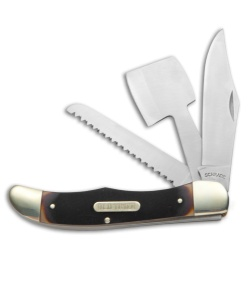 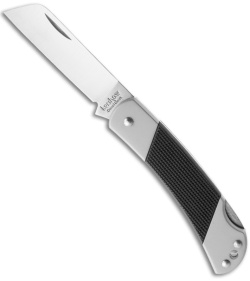 Muskrats are traditional slip joints that are ideal for skinning animals. It is a double-ended pocket knife with two clip point blades that are usually around the same size. The frames of Muskrat knives are typically identical to Stockman knives, but have different blades. 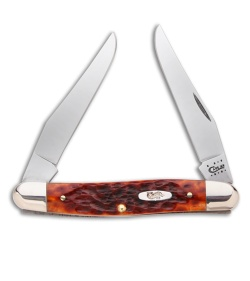 Peanut knives are traditional slip joints with two blades that pivot on the same side of the handle. Modern versions feature a clip and a pen blade. 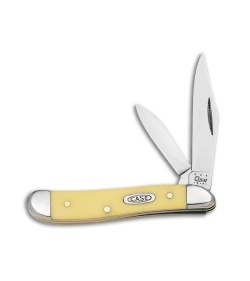 Pen knives are an outlier in the traditional knife world. These knives are defined as a small folding knife with blades in both ends. Its vague, but you can count on traditional pen knives having a pen blade on one end. These knives should not be confused with modern pen knives. Pen knives stem from the 1400s when knives were used for quill tip upkeep, although they havent always been folders. 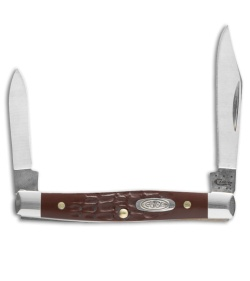 Case Pen Knives - Case is the only company that uses pen in the name of some of their traditional knives. This model has Tru-Sharp blades and a delrin handle.

Pruner traditional slip joints have a hawkbill blade with a concave cutting edge. Pruner knives are good for cutting things like carpet and round objects. 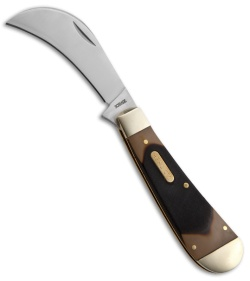 Schrade Old Timer Pruner - The Old Timer is back, but this time in Pruner form. This model has a 7Cr17 blade and delrin handle. It also features brass liners and polished nickel silver bolsters.

Russlock knives are traditional slip joints that have an elongated flipper attached to the blade. These knives are convenient for their easy one-handed opening. 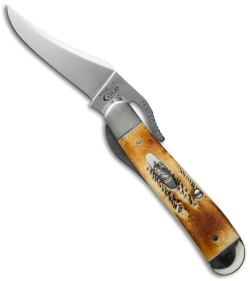 Traditional Sodbuster knives are slip joint and have one skinner blade with a handle and no bolster. The simple function and slim design make Sodbuster knives great for everyday carry. The Sod Buster design dates back to a German knife design called Hippekniep that stems from the late 1800s. Fun fact: Case has trademarked the term Sod Buster when it applies to folding knives. Other companies have trademarked Sodbuster in the past and some in the present. 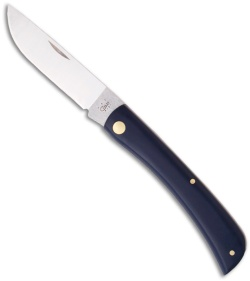 The Stockman knife is arguably the most popular traditional slip joint. Most Stockman knives have three blades: a sheepsfoot, spey, and clip point. The sheepsfoot is used for push cutting and sawing, the spey used for cutting through flesh, and the clip point for everyday tasks. 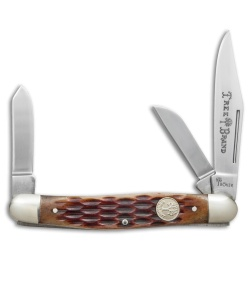 Boker Medium Stockman - A modern build on a traditional folder. This Stockman boasts a carbon steel blade, brown jigged bone handle, and brass linings. It has a clip point, wharncliffe and pen blade. 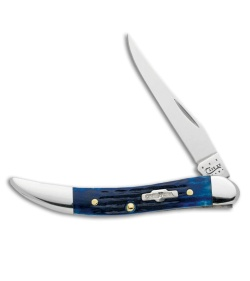 Case Texas Toothpick - The deep blue color on the bone handle really make this knife stand out. The blade is Tru-Sharp steel. 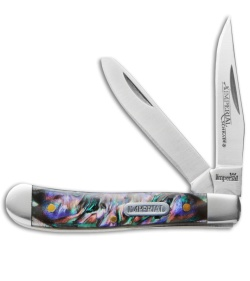 Schrade Imperial Trapper - This affordable traditional knife has a 3Cr13MoV blade and colored acrylic handle. Its compact, making it easy to carry in the pocket, bag, or purse.

A Whittler knife is a traditional slip joint that usually has a long blade on one side and two short blades on the other. Whittlers have two springs; the smaller blades operate on one spring and the larger blade operates on both springs. 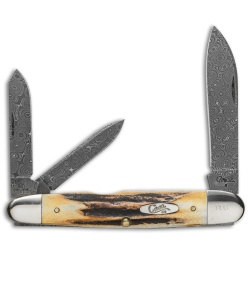 Case Cigar Whittler Damascus - This unique traditional slip joint boasts Damascus blades and a stag handle. This model was limited to 1,000 produced. If you missed out on this collectors item, no worries. You can find many more Whittlers here.

Victorinox Swiss Army knives are about as traditional as knives come. These popular pocket knives often feature blades, scissors, toothpicks, tweezers, and other tools one might need. There are still hundreds of variations of the popular little knife produced today. 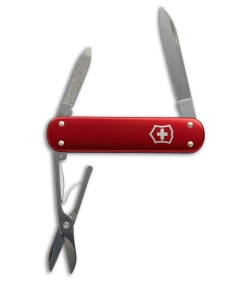 Victorinox Swiss Army - The pictured model is traditional red and has a blade, file, and scissors. It is unique in that it features a money clip instead of a keychain. Swiss Army knives range from $10 to $380.

Slip joint knives are non-locking folders that are very common traditional knives. They can have one or more blades and often feature different styles. A common style of slip joint is the Stockman.

Locking knives are also popular among traditional knives. The most common type of lock is lockback, where there is a locking mechanism that releases on the back of the handle. Another lock type as seen in Opinel Knives is the Virobloc. This is a safety ring that slides around the open or closed blade. There are other traditional knives with different locks, but these cover the majority youll come across.

The most common traditional multi-tool is the Victorinox Swiss Army knife. This style dates back to 1884 and often features a blade with other tools like scissors, files, toothpicks, bottle openers, etc.

There are many advantages to traditional knives. The beginning to the list is:

Like modern knives, traditionals can be found in a variety of steels. Common steel types:

Traditional jack knives are known for their appealing builds and handle materials. When done right, these knives will age extremely well and last decades or even centuries. Common handle materials include:

Case makes a wide variety of traditional knives in many different styles. Case is a traditional American knife company that started in New York in 1889. Whether its a slip joint or a lockback, Case has the right knife for you.

Schrade has been making traditional knives since 1904 and is the maker of the famous Old Timer. The Old Timer started as a Barlow and has grown to a full line of traditional and modern knives.

Buck produces traditional knives in many varieties. Buck is responsible for the popular Buck 110 that was introduced in 1964. It was the first folding knife that stood up to the strength of a fixed blade.

Victorinox Swiss Army knives have been produced since 1884 and are now made by Victorinox. They are considered multi-tools and feature things like blades, scissors, files, tweezers, and more.

Opinel knives are built with simplicity. They feature one blade that is locked by a Virobloc ring that slides around the blade.

Queen Cutlery specializes in traditional pocket knives that are elegant and beautifully designed. Queen Cutlery prides themselves on using only quality materials in their knives.

Knife laws, regardless of the type of knife, vary widely around the United States. Some states outlaw certain styles, while other focus on the length of the blade. Some states are very relaxed with their laws and anybody can carry any type of knife they want.

The good news is traditional knives, especially slip joints, are widely seen to be less dangerous than modern locking knives. Part of this is the size of the blade. Another part is the style and notion that they are used more as tools rather than weapons.

Check your local laws before carrying a knife. As we said earlier, state laws vary with different types of knives.

This guide buyers guide is meant to be an informational resource on traditional knives and popular models. That said, we know its not the most comprehensive list out there. After all, there have been multiple 600 page books written about traditional knives! We did our best to cover the popular models and then give examples of some great sellers here at Blade HQ.