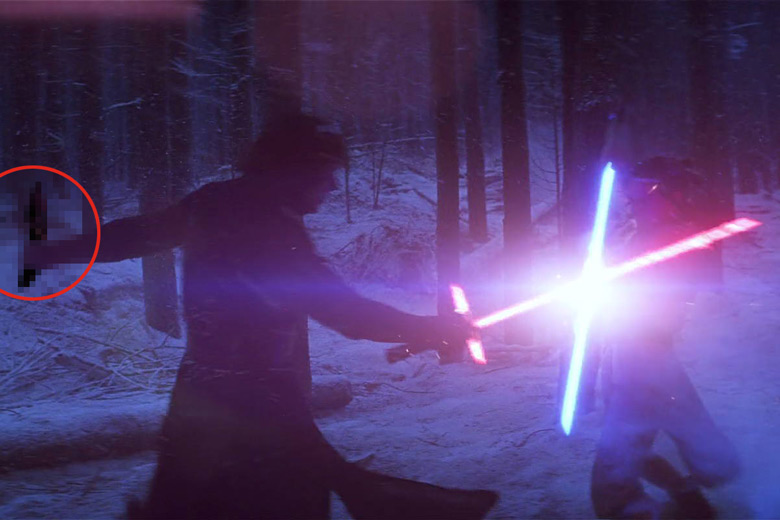 Today is May the 4th aka May the Fourth Be With You aka STAR WARS DAY. This post isn’t about lightsabers, Jar Jar Binks, or Porgs—it’s about knives, you Star Wars loving geeks. I recently got to rewatch the movies (yeah, my job is suuper haaard), and I captured all the best knife moments for your reading pleasure. Don’t remember Yoda’s everyday carry? What knives did Obi-Wan Kenobi and Luke Skywalker wield? Bonus points if you know what blade made an appearance in the hand of Kylo Ren in The Force Awakens.

Boba Fett was the fiercest bounty hunter in the galaxy. He frequently went to war against Han Solo and Chewbacca in servitude to both Darth Vader and Jabba the Hut. His weapon of choice was a blaster gun, and he used a rocket jet pack to navigate battles. A master of gadgets, Boba Fett would only carry the Microtech Bounty Hunter OTF, a knife as rare to find in stock as kyber crystal.

Rebuilt as a cyborg after sustaining major injuries in a ship crash, General Grievous was a master villain in opposition to the Republic. Shortly before battling Obi-Wan Kenobi in a fight to the death, Supreme Commander Grievous flashed his prized WE Knife Company Eschaton. His four lightsabers may have distracted you from his pocket knife… General Grievous carried the Elijah Isham designed knife in perfect compliment to his mishmash of robotic cyborg prostheses.

Sometimes the butt of a joke and frequent recipient of bullying, C-3PO was more than just a polite servant bot. On more than one occasion his versatile skill-set saved the day and kept the Jedi alive. Never violent, C-3PO exclusively used his beautiful Arcform Slimfoot for EDC tasks such as cutting trapped heroes from netting and cooking food for his Ewok friends.

Darth Vader—has there ever been a more infamous villain? Evil to the core and devoid of mercy, only the baddest, blackest, coldest blade would be appropriate. Watch closely and you’ll see Vader flash his Medford Huntsman Strapper.

From scrap scavenger to master of the Force, Rey ascended from the lowest rung of society to save the world. She is strong, confident, and cool under pressure. There’s no better pocket knife for such a Jedi than the Benchmade Phaeton OTF.

Mentor and guardian of Luke Skywalker,  Obi-Wan Kenobi always seems to have the perfect, sage bit of wisdom needed to save the day. From rescuing Luke from Tusken Raiders to introducing him to Master Yoda, Ben Kenobi is the purest representation of a Jedi, and no knife suits him better than the classic Buck 110 Automatic Knife .

Jedi Master and destroyer of the Death Star, Luke Skywalker is the ultimate hero of the Republic. Fueled by a desire to avenge the murders of his family, Luke is set on a destined path to rescue the world from the evil Galactic Empire . Surviving only by the skin of his teeth, Luke uses his Benchmade Anthem to escape the cave of the Wampa.

Grandson of Darth Vader and, sadly, seduced by the Dark Side, Kylo Ren is a commander in the ranks of the First Order. Emotional and dangerous, Kylo Ren uses the full power of the Force for evil. Willing to probe the minds of his victims, he stops at nothing to succeed in his villainous goals. In a fight against Jedi hero Rey, Kylo Ren can be seen clutching a Microtech Stitch Automatic Knife in his off hand.

Everyone’s favorite pilot of the Millennium Falcon, Han Solo represents the human quality within us all. Humorous, confident, brash—even a little bit cocky, he plays a balance to the seriousness of all the Jedi Masters. Han Solo was trapped for over a year in carbonite—I bet he wishes he had his Smith & Sons Comanche Fixed Blade to escape from that prison.

R2-D2 is a fan favorite—and for good reason. From communicating holographic messages, to repairing Luke’s X-Wing, to kicking droid butt, this little guy was always ready to save the day with a cheerful chirp on the side. What tool did he use? The Leatherman Charge Multitool! Beep beep boop!

Yoda. Trainer of Jedi. Master of the force. Pretty good with a lightsaber, too. Small in size but massive in wisdom, he is definitely someone you want on your team. What knife did Yoda EDC? No knife is a better fit than the natural G-10 Lum Chinese!

Did you enjoy this post? Didn’t notice these knives on your first, second, or third viewing of the movies? Give them another watch—you deserve it! Happy Star Wars Day and May the 4th Be With You!
Who’s your favorite Star Wars character? Do you carry any of these knives? Would you be a member of the Galactic Republic or Empire? Let us know in the comments below.
If you aren’t a fan of Star Wars EDC options, check out our other guide to the Best EDC Knives.
Do you like fun? Check out our Bowie Knife Survival Guide!